HAIR: What is it?

I know – gratuitous shots of hair but I love these pictures.

Hair – I googled it and copied the first thing that came up. What is hair? Hair is “any of the cylindrical, keratinized, often pigmented filaments characteristically growing from the epidermis of a mammal.” *

Every hair on your body grows from a FOLLICLE within the skin and each follicle contains living tissue that makes your hair grow. The portion of the follicle containing the living cells is known as the hair root and the portion of the follicle you see growing from the scalp is known as the hair shaft.  The living tissue in the hair root produce new hair cells and as the hair cells move up through the root, they mature and harden. The process is called keratinization. So each hair strand that protrudes from the scalp is a fiber of hardened protein. While the tissue inside each follicle is living, the hair that grows from it (the hair we see outside the skin) is not living.

I know. I thought I’d read it wrong until I saw the same thing in everything I read about hair that was science related. So the hair we can actually see is dead? Really? It definitely gave new meaning to all of those shampoo commercials that claimed their products “brought new life” to hair. Lies! We fall for the lies each and every time because we’re suckers for the packaging a product comes in or because we dream of being like the hair model a company uses in their ads. The latter isn’t so awful though. There’s nothing wrong with dreaming or hoping we could look like the model used in an ad but we shouldn’t base our worth as individuals on whether or not we look like the model. Even the models don’t look like the ad-version of themselves so use a model or another person you desire to look like purely as a form of inspiration.

The hair we see, the hair shaft, is made up of layers: the cuticle, the cortex and the medulla. The CUTICLE is the layer on the outside that protects the inside of the hair from damage. When viewed under a microscope the cuticle looks like thin tiles that overlap somewhat similar to tiles on a roof.  The second layer, underneath the cuticle, is the CORTEX which is the bulkiest layer and is made up of hardened proteins. Hair’s structure, color and strength are determined in the cortex. The innermost layer of the hair shaft is the MEDULLA, a soft spongy mass of tissue.

I used Paintshop to draw a basic picture of this for you (so don’t laugh at my picture). 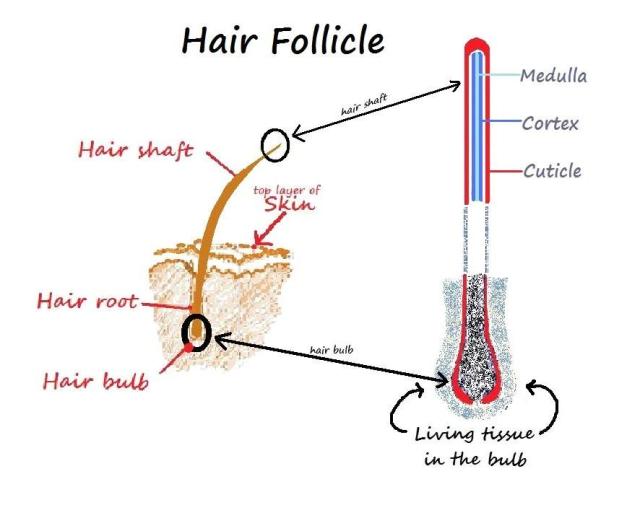 So hair is mostly a collection of hardened protein fibers we know as keratin (approximately 90% of hair is keratin).